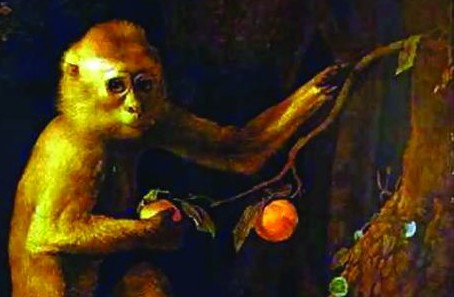 Gainesville, Fl—Our ability to drink alcohol is the result of a single genetic mutation that went down roughly 10 million years ago, a recent study has revealed.

Desperate times, the study posits, drove our hominid ancestors out of the trees and down to the forest floor to feast on rotting, fermenting fruit. Those lucky enough to possess the ADH4 enzyme were able to more effectively digest the alcohol (and thus survive to pass on the trait), while the teetotal hominids were likely to starve to death.

“I suspect ethanol was a second-choice item,” the lead study author Matthew Carrigan of Santa Fe College rather foolishly suggested. “If the ancestors of humans, chimps and gorillas had a choice between rotten and normal fruit, they would go for the normal fruit. Just because they were adapted to be able to ingest it doesn’t mean ethanol was their first choice, nor that they were perfectly adapted to metabolize it. They might have benefited from small quantities, but not to excessive consumption.”

Not surprisingly, the genetic switch was thrown about the same time our ancestors adopted a more grounded lifestyle. Because, as any experienced drinker can tell you, it’s almost always a bad idea to get loaded while sitting in a tree.