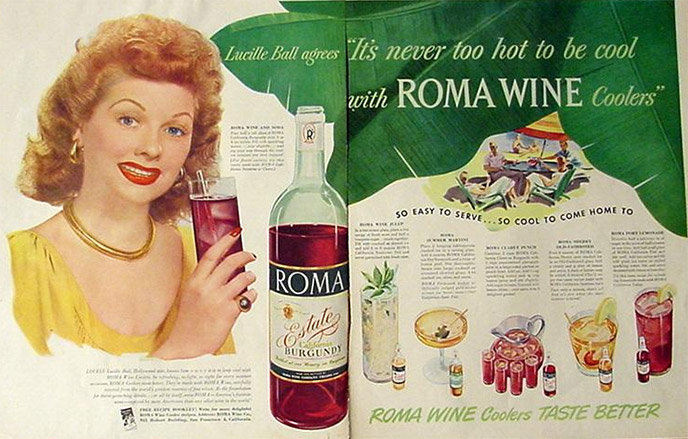 Who knew that Lucille Ball once pitched wine coolers?

In the 1940s and early 50s, America’s biggest winery was Roma Wine Company of Fresno, California.  They claimed to be “America’s best-selling wine… Made in California for enjoyment throughout the world.”  Roma has since fallen off the face of the earth — as far as I can tell, no Roma product has been sold since at least the 1980s, and perhaps earlier.  But in the 40s Roma was riding high, sponsoring the hit radio show “Suspense,” and endorsed by Lucy, Jane Russell, and Joan Bennett.

Lucy later went on to shill for Carling’s Red Cap Ale, but in the 1948 ad pictured above she informed America how “e-a-s-y it is to keep cool with Roma Wine Coolers.”  For example:

ROMA Wine & Soda – Pour half a glass of ROMA California Burgundy over 3 or 4 ice cubes.  Fill with sparkling water…stir slightly…and sip your way through the coolest summer you ever enjoyed!

Three years later, Lucille Ball moved on to bigger and better things when “I Love Lucy” debuted.  As for Roma, as late as 1955 it was still claiming to be America’s favorite wine, but it had no response when rival E & J Gallo debuted Thunderbird in 1957.  Bought and sold multiple times, it passed into obscurity.  It’s Roma’s tough luck that the company expired before the ridiculous wine cooler fad of the mid-80s.  The simple recipes Lucy once endorsed could have put it right back on the map.