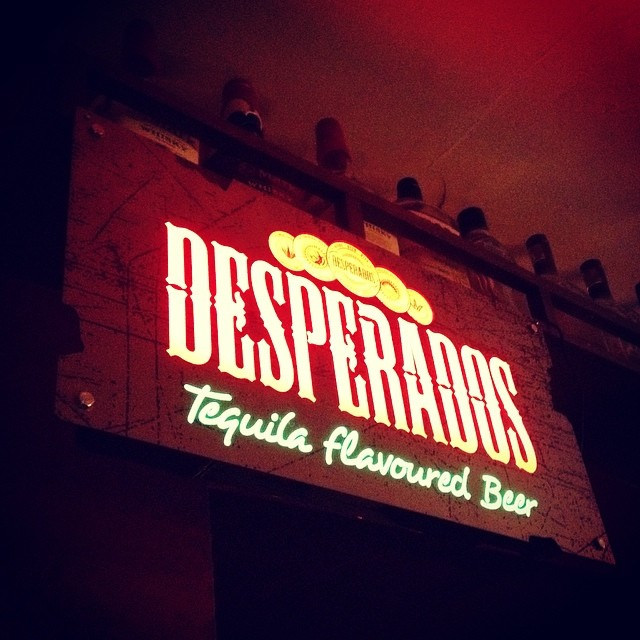 So much for Desperados, gone from the U.S. before most people had a chance to taste it. The Heineken lager that’s aged in tequila barrels and infused with “tequila flavors” is a modest hit overseas, so the brewery introduced it into a few American test markets just last year. Evidently things didn’t work out so well, and Heineken quietly announced last week that Desperados was departing these shores.

Desperados isn’t the first tequila-themed beer to meet with misfortune here. That would be Tequiza, a beer “with blue agave nectar” for which we have Anheuser-Busch to thank. Tequiza rolled out in 1998 under the slogan “Give it a Shot” — the ads implying that Tequiza was a tequila shot and a beer chaser rolled into one. But at a meager 4.5% ABV Tequiza wasn’t worth a shot. It limped along until 2009 before being mercifully killed.

American fans of Tequiza and Desperados, if there ever were any, can take comfort in knowing that A-B is back on the case. Behold Oculto (Spanish for “hidden”) an “agave-infused” beer about to go nationwide this fall. At least Oculto has a little more kick to it than Tequiza did, coming in at 6% ABV. The labels are artfully designed to resemble Mexican Day of the Dead masks — and, for added thrills, the eye sockets in the skull mask will start to glow when the bottle gets cold. Barrel-aged beer is becoming more popular among craft brewers, and some have even experimented with used wine and cognac barrels. But none that I know of have taken the next step of artificially infusing the beer with wine or cognac or tequila flavors, as Heineken and A-B have done. Maybe Oculto’s freaky bottles will help it catch on as a gimmick-drink; otherwise, it’s hard to see this unnatural hybrid getting any more love than did Desperados.