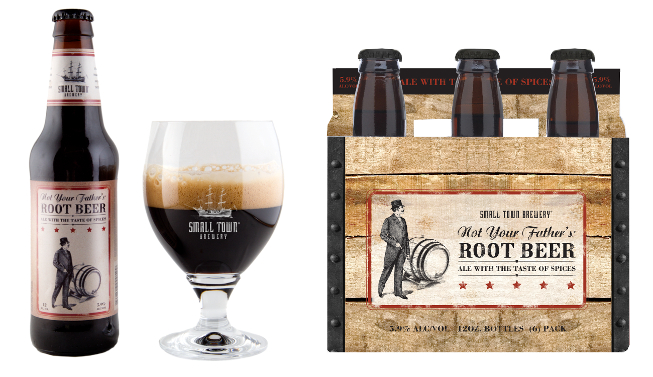 It seems that a brand of beer that tastes just like root beer, called Not Your Father’s Root Beer (hereinafter NYFRB) is turning into a pretty big deal. Cooked up by an operation that calls itself Small Town Brewery, the beer (if that’s the right description) is bottled at 5.9 % ABV and is flying off shelves so fast that stores can’t keep it in stock. It’s a phenomenon, but also controversial, not least because Small Town Brewery seems to be connected in some mysterious way with Phusion Projects LLC, the company that made the notorious “energy beer,” Four Loko.

You may remember Four Loko: launched in 2005 by three college friends, it too became a sensation — before it was forced off shelves by the FDA in 2010. It was 12% ABV, infused with caffeine, and became the booze of choice for young drinkers. Rappers celebrated it. Killah Kid Kriz wrote a Loko tribute called “Loko Is My Liquor.” Ricosuave’s “So Loko (4Loko Anthem}” contained the lyrics:

I know Jesus turned water into wine / But he woulda turned it to Four Loko at a party of mine.

It picked up the nickname “blackout in a can” and was linked to numerous hospitalizations for alcohol poisoning. At a college house party in Washington state, so many party-goers were felled by Four Loko that they thought they’d been given a date-rape drug. Colleges started barring it from campuses and grocery stores from their shelves. In an infamous case in New York City, gang members used Four Loko as an instrument of torture, forcing their victim to guzzle four cans of it successively. New York Sate banned it from its borders, and other states followed suit. Senator Chuck Schumer railed against it as “a death wish disguised as am energy drink” and called for a federal ban. When the FDA got involved, Phusion was forced to pull Four Loko and reintroduce it in a non-caffeinated version.

No such uproar is likely to haunt NYFRB. Its worst crime seems to be that it tastes more like a soft drink than beer, just another malternative in disguise. That, and NYFRB’s suspicious link to Phusion, which smacks of subterfuge. It took a bit of sleuthing by philly.com reporter Don Russell, aka “Joe Sixpack,” to reveal the Small Town Brewery/Phusion connection:

* The label for Not Your Father’s Root Beer was registered by Phusion.

* And, tellingly, Small Town Brewery’s own website includes a contact address that is the same as Phusion’s. Or, at least it did, until the address was erased from the website sometime this spring.

You can see why the creators of NYFRB, whoever they really are, would want to keep the Phusion name under wraps. Part of it is simply that it’s easier for customers to fall in love with a beer they think is made by “small town” regular Joes working out of their basement, as opposed to some big company. But more importantly, no one wants to be reminded of the infamous Four Loko era again.