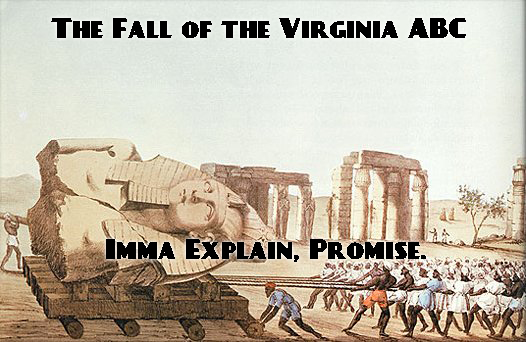 I discovered today that this is November, which means we had an October that I didn’t quite notice, which means only one thing: I’ve discovered a time machine. Maybe it had something to do with a plucky young lad and his questionably mentally stable mentor and a ridiculous sports car designed by a very enterprising cocaine enthusiast. Maybe it was luck.

I’m not sure when I discovered it (a consequence of the inherent troubles with time travel, I’m sure), but I can tell you that you can make it out of gin (hint: it’s just lots of gin; as in Step One: get lots of gin, Step Two: it’s the future! And your utilities are shut off, so no lights or heat! So it’s the…past? Goddamn is time travel confusing). Anyways, there is other good news: the useless thugs of the Virginia Alcohol Control Board are facing yet another lawsuit over their excessive use of force when “questioning” an exemplary UVA student, Martese Johnson, earlier in the year. Some eloquent bastard wrote beautifully about it before. Perhaps I can meet him some day. After all, with gin all things are possible.

To the point, Mr. Johnson was brutalized for his non-violent and non-threatening resistance to questioning and apprehension by crew-cut muppets who were plainclothes agents of the ABC, an organization that feels it is necessary to arm its…”officers” is too generous of a term…grunts so that they can enforce laws regarding the sale, consumption, and distribution of alcohol within their jurisdiction. Every part of that sentence ought to rile you to anger. If it doesn’t, then think of it this way: if your home is about to be invaded, or if you’re about to be hunted down for sport, you call the police; if you think that a 20-year-old might have gotten his sticky little hands on a Bartles and Jaymes, you call the ABC. Whose number you would have to look up, because this shit is not an emergency.

Anyways, I’m calling this good news for two reasons. First, Virginia’s ABC has faced a similar lawsuit a few years back when they bum-rushed another UVA student outside of a grocery store, drew their weapons, and attempted to break her car windows to get to her on the suspicion that she might have bought some beer. Their evidence? The fact that she was carrying a bag with some cans in it. The truth? She was buying sparkling water and ice-cream for an Alzheimer’s charity event.

They charged her with assaulting two officers and fleeing the scene, and that was ruled total bullshit. She got a settlement out of the suit, and the ABC was shown to be a farcical imitation of legitimate law enforcement who get…warning: pun inbound…drunk on their own power and sense of purpose. A judge ruled against the ABC, and it’s a shame that the agency is allowed to continue sucking off of taxpayer money to fund their unnecessary thuggery with those agents still in its employ. But a small victory against the Prohis is a victory nonetheless. We’ll take it.

And we’ll take the one that ought to come from Mr. Johnson’s lawsuit as well. Here’s to you, Martese Johnson. I’ll be waiting for the ruling, and I hope those bastards pay. That isn’t law enforcement, that’s state-sanctioned thuggery, and I don’t use that term lightly–the original “thugs” were rather fond of murder, as it turns out.

Let me conclude with two things:

First, the image at the top of this article. It’s a rendition of the Younger Memnon, a sculpture discovered in Thebes, being hauled away, bound for England. That’s the bust that supposedly inspired the magnificent poet Percy Bysshe Shelley (who was, it seems, a teetotaler, unlike his more likable friend Lord Byron, that dapper lush, who incidentally had a famous drinking cup made from a human skull because…reasons?) to pen one of his most famous works, “Ozymandias”:

I met a traveller from an antique land
Who said: “Two vast and trunkless legs of stone
Stand in the desert. Near them, on the sand,
Half sunk, a shattered visage lies, whose frown,
And wrinkled lip, and sneer of cold command,
Tell that its sculptor well those passions read
Which yet survive, stamped on these lifeless things,
The hand that mocked them and the heart that fed:
And on the pedestal these words appear:
‘My name is Ozymandias, king of kings:
Look on my works, ye Mighty, and despair!’
Nothing beside remains. Round the decay
Of that colossal wreck, boundless and bare
The lone and level sands stretch far away

Just read the last four lines–that’s the legacy of groups like the ABC. They think they have a mighty empire and the authority to impose it, but they will be forgotten like so many before them. In the end, their legacy will be as laughable as that of Ozymandias: all bluster and dust. Let’s hope Mr Johnson’s lawsuit against them is one more step in that rightful direction.

And second, it’s still illegal to swear in public in Virginia (seriously, why haven’t you read these fine words on the subject yet?), so why don’t we start a new tradition–March 18th (the date of Martese’s battery) is now officially “Swear at a Cop in Virginia” day. It has been decreed. This outdated-law-that-is-still-somehow-on-the-books shit needs to stop. Our Founding Fathers are proof that sometimes you just need to stand up and say “I aim to misbehave.” By “Founding Fathers” here I mean “Mal and the crew of Serenity.” Frankly, I think that’s a better call.

So, cheers you dissident souses and sonsabitches alike. And in early celebration of SCV day, “Fuck you, ABC, and the Crown Victoria that you rode in on!”

I’ll see you stout fellows whenever, ’cause I gots me a time machine.