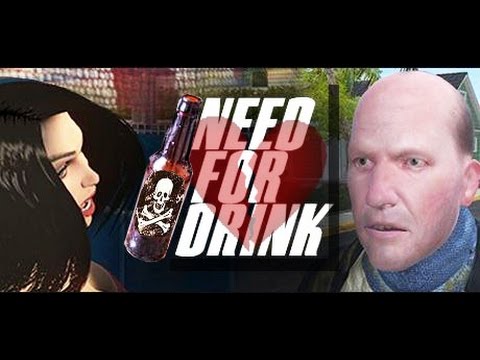 If you ever wanted to play a video game that revolves entirely around drinking, now’s your chance.

“Need For Drink” is a new PC game from the Russian development studio Room710 Games. It went for sale in April, although it’s still listed as Early Access, with more content supposedly to come. It sells on Steam (and only on Steam, as far as I can tell) for a mere $0.99.

Ninety-nine cents isn’t much, but it doesn’t buy you much, at least to this point. In single-player mode you take control of a husband who runs around the house uncovering stashed booze, with the goal of getting drunk before his wife gets home. (You can watch a “Let’s Play” of the action here.) In multi-player, a second player takes control of the screaming wife and tries to stop him. That’s it.

It’s a nicely-weird idea for game, and it does have its funny moments. Unfortunately multiplayer appears to be dead; I never was able to find a partner to play. Everything there is to do in single-player can be wrapped up in 15 minutes. You might decide you’re better off saving the dollar to spend on actual booze.

Or you could look at “Need For Drink” as a small act of defiance in the face of nannies and busybody scolding, and worthy of support. Less than a year ago we saw the latest round of fretting, by the usual suspects, about alcohol “images and references” in video games. Even if few people actually play “Need For Drink,” it’s still encouraging that the game exists at all.