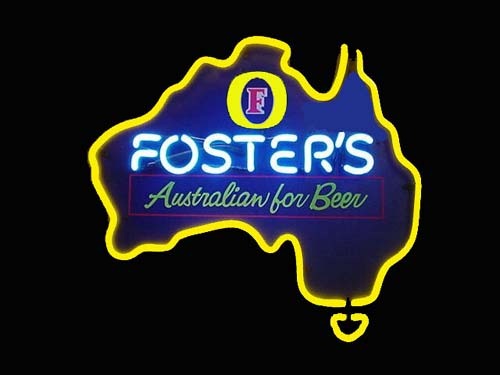 Foster’s lager — the dismal, bland brew with the kangaroo and Southern Cross on the label — likes to bill itself as the quintessentially Australian beer. Alas, if you live in North America, any Foster’s you buy is brewed not in Australia but in… Fort Worth, Texas. This has been the case since 2011, but it was news to an angry Foster’s fan in New York City who sued the brewery last week, claiming to have been deceived about the origins of his beloved favoite beer.

Foster’s brewery was actually founded by two Americans, the brothers William and Ralph Foster, who moved from New York to Melbourne back in 1887 and decided to try their luck selling beer. Their product wasn’t a big hit in Australia, then or now; in fact it seems to be considered something of a joke in Australia today. But it has gained a following in the United States. It first appeared in the U.S. in 1972, and turned some heads with its big 25.4-ounce “oil can” portions, a pleasant surprise to Americans accustomed to pipsqueak 12-ouncers.

Foster’s really took off in the U.S. in the 1980s with the invaluable endorsement of comedian Paul Hogan, “Crocodile Dundee” himself. The brewery has been doubling down on supposed Australian authenticity ever since, instructing customers in “how to speak Australian” and declaring Foster’s nothing less than “Australian For Beer.”

Foster’s was acquired by SABMiller in 2011, and that same year the cost-cutting corporate behemoth moved North American production to Fort Worth. Hence the lawsuit by the angry man in New York.

If you read the fine print on North American Foster’s cans, it does at least claim the beer’s Texas origins. Reportedly the Texas brewery imports its yeast from Australia to recreate the flavor of the genuine article, and employs an Australian brewmaster to oversee the process. There doesn’t seem to be any grand conspiracy to actively fool customers — unlike what Anheuser-Busch InBev tried to get away with in its recent, notorious mishandling of Beck’s.

Still, the brand has spent the last thirty years shamelessly wrapping itself in the Australian flag. It’s not unreasonable for an American Foster’s fan to expect his oil can of lager to actually come from Australia.