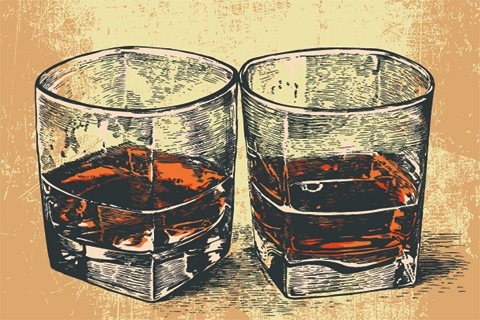 I think we can all agree that something funny happened in the vodka market over the course of the last few years. Awestruck, we watched, as the classic flavorless spirit met with all kinds of unexpected flavor infusions in the liquor market, with escalating saturation, and an increasing level of absurdity. Cherry Cola vodka, colored a horrifying shade of artificial black. [1] Peanut Butter and Jelly vodka, a godless chemical cocktail that’s path to creation is ghastly to imagine. Fucking Cinnabon-branded vodka happened, which might just be the nadir of this awful trend, because if I have to come up with anything worse to put in my body than a Cinnabon, I guess it’d have to be a Cinnabon mixed with literal poison.

There is, quite frankly, nowhere else for this market to go, and I’m sure most industry heads would agree. When you’ve exhausted everything from sriracha to sweet tea, you’ve pretty much hit the bottom. What else is there to do with this exhausted market? Could it be… expand horizontally? Take the flavor game to other spirits, and see what happens?

No. Stop right there. This is heresy.

Oh what I wouldn’t give to take a trip to the 1980s, where there might have been a shot at nipping the scourge of Fireball Whisky in the bud. Surely there would’ve been a way to pull this off. Perhaps by adding more antifreeze to the mix, and scandalizing it right out of the market. I don’t know. I wish somebody had.

In case you’re unfamiliar, Fireball Cinnamon Whisky is bottled garbage for terrible people, a 66-proof moderately spicy waste of time that always looks as out-of-place in the whiskey aisle as a Little Tikes Trike at a Harley Dealership. Tastes Like Heaven, Burns Like Hell! Please. That tagline is at least 70% fiction. [2] It is a product of the Sazerac Company, a New Orleans-based outfit mostly known for its reticence in advertising, the me-too quality of a lot of its strategically-inexpensive products, and, new to me, a rather obnoxious website. [3]

I’m not here to rage against Fireball, or Fireball’s runaway success—but I am here to rage. To the distilleries that have idly watched the Sazerac Company ride Fireball straight into the bona fide cultural zeitgeist and thought to themselves, “damn, we gotta get a piece of that action,” STOP! Stop in the name of decency, you out-of-control capitalistic headhunters! Is a dollar really worth the destruction you will raise in the pursuit of a flavored whiskey to call your own?

I’m serious—stop it. Stop it right now before you kill us all. Look at this writer for the Huffington Post try to put together a believable endorsement for the newer-to-the-market Wild Turkey American Honey Sting, a 71-proof strange brew that “allegedly has some ghost pepper in it”. Look at these ringing endorsements:

“It’s better than the original honey whiskey and better than Fireball — it’s a fancy Fireball.”

“I love it! It’s like Fireball but more authentic. It has cinnamon and it’s not syrupy or thick like Fireball.”

“Definitely good enough to drink without a mixer. It’s better than Fireball.”

The world doesn’t need this shit. No one goes looking for a red wine that’s been infused with maple syrup. If it tastes like maple syrup of its own accord, then fine, cool. But don’t go upturning a bottle of Aunt Jemima into my bourbon and shrugging it off like this is just how it’s done now. If I want my whiskey to taste like hops, I will pour it in a beer.

Cut it out, distillers. You’re not getting people into whiskey, you’re saturating them with bullshit. This is whiskey we’re talking about, people! The water of life! It deserves better. It deserves better than being tarted up and tricked out for a quick buck.

Look, you can have vodka. Do with it what you will. Vodka is made for infusions—its blank palate is perfect for augmentation, whether you want to throw some vanilla beans in your own infusions or pick up a bottle from the store that’s already all shoved-up with “essence of ham sandwich.” But to flavor whiskey, you have to destroy what already exists. You have to paint over something beautiful. How could it ever be worth the cost?

[1] WHY? Why would you do this? Cola and vodka don’t even go together as a palatable cocktail, so one must wonder if you’re just goddamn kidding around with this amateur hour horseball fuckery, and for that matter, if you could be any more blatant in your marketing toward the pre-legal middle school crowd, with this, THIS malt-shop-looking insult to both god and man, tasting like a wayward youth’s Baby’s First Cocktail but for some reason with a PRICE TAG instead of a STERN WARNING to STEER CLEAR and GROW THE HELL UP

[2] I was going to say “Fireball Cinnamon Whisky—Tastes… Like Hell!”, but even that’s a pretty big reach. Hell’s flavors would be much more bold. A more suitable one would be something like, “Tastes Squicky!”, in a word balloon coming out of the mouth of a fussy cartoon baby. THERE’S your target market. I guess.

[3] To be fair to Sazerac, I find their offerings more eclectic than bad, but there is a distinct tendency toward “off-brandness” in most of their products. But they’re also responsible for Pappy Van Winkle. So it goes.