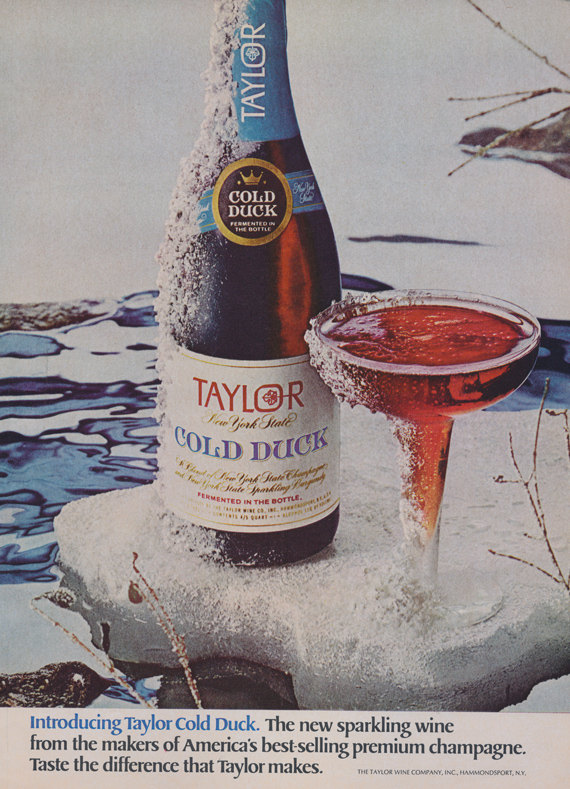 Who knew Cold Duck was still around?

In holiday seasons gone by, it used to be that no feast was complete without a few bottles of Cold Duck. This hybrid sparkling wine with the goofy name was the “champagne” of choice in the US for a few years, before flaming out into oblivion. Or not quite oblivion: E & J Gallo still makes a version of the stuff. You can get it pretty cheap, too, though I wouldn’t recommend it.

Cold Duck’s origins go back to an old, obscure German custom of mixing the dregs of unconsumed wine with champagne after a meal. This was known as having a Kalte Ende, or “cold ending,” to the meal, as opposed to finishing with hot coffee. At some point those wacky Germans altered the name to Kalte Ente — “cold duck,” the new moniker for the custom and the drink.

Cold Duck came to America by way of a German immigrant who introduced it in his Michigan wine shop in the 1930s, mixing champagne and burgundy. He started selling it by the case in 1963, and it turned into a local hit. Other winemakers picked up on the trend, and by the late 60s it was a certified smash, available everywhere. The bigshots like Gallo, Paul Masson and Taylor were forced to come up with their own versions of Cold Duck or get left behind. (The Gallo version sold under its Andre Champagne label, and Andre’s “Greet the Season” ads promoted it relentlessly at Christmas.)

As fads tend to do, though, the Cold Duck craze ran its course. It was already fading out by 1972, and by the end of the 70s was all but forgotten.

Also as fads tend to do, it turned into a joke. Keenan Ivory Wayans got the most mileage out of it: His character on “In Living Color,” the clueless pimp Frenchie, always brought Cold Duck to enliven the soirée to which he wasn’t invited.

So it’s surprising to see Andre Cold Duck still on Gallo’s roster. It might be useful to bring to a party as a gag, a la Frenchie. If there’s really nothing else to drink, it will at least do the job. Otherwise, there’s little reason to revive this dead duck.