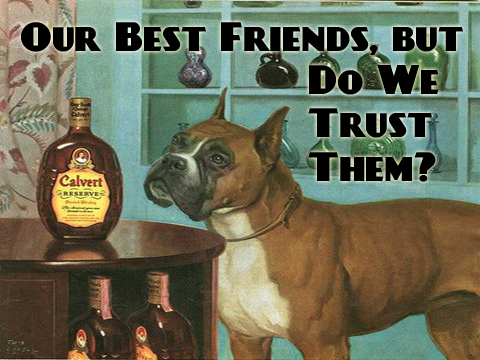 Do you have a pet? Or do you have a charismatic plant or a coat rack that you dress up and talk to? You know, just to avoid the crushing weight of permanent loneliness? Of course you do!

But have you ever wanted to drink with that cat/dog/oddly communicative lizard that totally gets you/aloe plant that reminds you of your personal failures/sassy coat rack that won’t keep its political opinions to itself? Of course you have! Sometimes I wonder why I even ask.

The age-old tradition of drinking alone has long been misunderstood, maligned more often than not, and typically written off as a symptom of a drinking “problem.” As if we weren’t already very, very good at the solo exercise of Drink. Of course, those screeds have been penned by the same sort of people you’d never want to spend a solitary minute with in a pub, let alone ones you would ever possibly want to get good and out of your skull with in private. As do you, I have much to say on the subject, but I defer to FKR’s essay on the matter for the time being. (But seriously, leave your opinions in the comments. This is a goddamn dialogue.)

And yet there is another product on the market that can only be seen as one of two things: either 1) something that is symptomatic of our refusal to acknowledge pets as members of their own species, opting instead to treat them as small and hairy versions of lovably dumb humans; or 2) a gross perversion of the craft of booze in the desperate attempt to simultaneously buy into and attempt to negate the charge that drinking alone is a bad thing.

This article is about cat wine. Apparently this is a thing that Japan (because of course it would be from Japan) developed some time ago, but there is now a US-based…vintner?…animal rights objectionist?…who thinks that we need a way to incorporate cats into our drinking routines. Now, I may be trolling for a lawsuit after a few of my other previous articles, but this just seems insane. Insane to the point that I think Crimes Against Drinking are being perpetrated here.

The premise of cat wines is that they’re non-alcoholic (so step off, PETA), but they do contain catnip, which is either the kitty version of straight moonshine or quality LSD, depending on your experiences with either or just with cats that get into it and go fucking nuts. Without a first-hand opinion, we’re left in the dark a bit about the subjective truth of it, but we now have a kinda-wine product to waste money on in order to get a cat drunk…or high…or whatever. It doesn’t matter because it’s nonsense.

Here’s my problem: it’s marketed as a pet wine (and at least the Japanese version is made from wine grapes), but contains no alcohol, and it panders to both the anti-solitary drinking crowd and the “but she thinks she’s people!” pet-obsessed crowd.

Through some rigorous field testing, I think I found a solution: 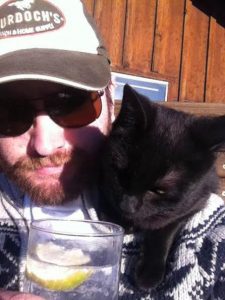 If you really need to drink with a pet in order to just make it through the day, or to reach the right level of mellow, then get a pet that likes to party. A barn cat that likes gin and tonics with some fresh lime is a solid companion–especially if it insists on riding on your shoulders while you amble about, toasting the setting sun and saying vaguely inappropriate things about any- and everything that pops into your mind. Why do we need to complicate the pure joy of drinking with neutered products for another species by way of a bastardized “wine”? Our pets and us descended from common ancestors, so we have common roots. The joy of one harkens to the joy of the other. We all like to get twisted, so why put up the facade of “wine” just to make things less weird? Let’s all get ripped. Together.

Perhaps this catnip-based beverage is a great idea, and perhaps it is terrible. If you use it to keep from drinking alone, then shame on you. Get a damn party cat. If you think your life will be better by spending money on “cat wine” so you and your cat can get twisted together, then please call me.  I have more to say on the subject.

And if you want to party with a sweet cat that won’t judge you, contact me and we’ll set up something great. No gimmcky wines will be involved. This cat drinks booze straight, like it ought to–like God intended, I think.