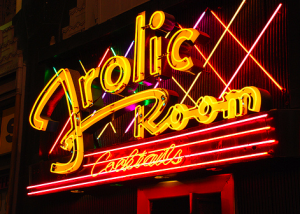 Informed that Hollywood’s Frolic Room is one of America’s great dive bars, your Brutal Hammer correspondent rushed to the scene for a first-hand investigation. Let it be confirmed that all the stories you’ve heard are true.

The joint started out in 1930 as a speakeasy. There was no front door then: patrons slipped in through a secret door in the adjacent Pantages Theater (another classic institution that is still standing). The Pantages hosted vaudeville acts in those days and was the perfect cover for drinking on the sly.

Over the decades the Frolic Room built its reputation as a destination for serious drinkers. Charles Bukowski was a frequent habitué, and to this day his image is enshrined behind the bar. Elizabeth Short, the Black Dahlia, was last seen alive stumbling out of the Frolic Room.

It is a tiny place, a true hole-in-the-wall. Your correspondent visited on a recent Sunday afternoon and rubbed shoulders with both working-class drinkers and Beautiful People of Hollywood. All were welcomed alike by the bartender, a professional gentleman attired in bow-tie and vest. This writer ordered a Glenfiddich neat (okay, two) and was given generous pours. The charge was $8 each, a shockingly reasonable price by LA standards.

The friendly bartender confided that Hollywood stars still drop in from time to time. Brad Pitt has been seen there, and Kiefer Sutherland makes frequent late-night appearances (Mr. Sutherland is primarily a scotch drinker, my informant added).

It is a unique experience to drink in such a place that fairly oozes character and history. I encourage all drunkards to stop in at the Frolic Room if ever you have the chance.