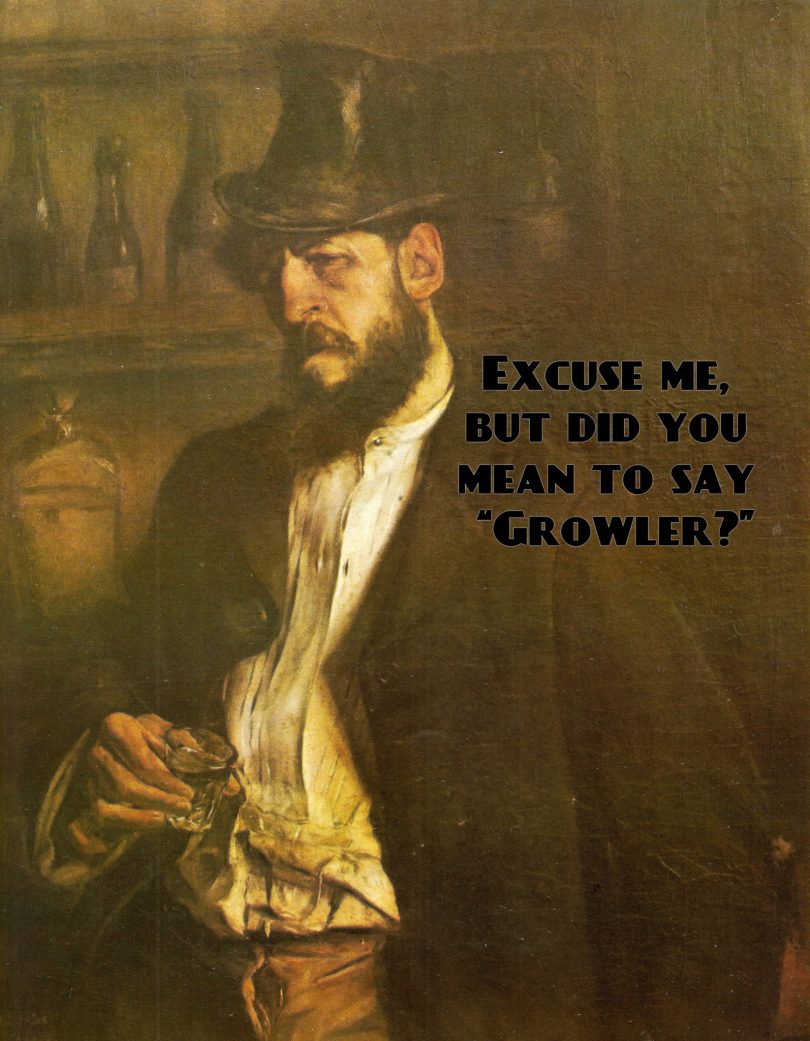 This one caught me by surprise: “crowlers” have become a new thing in the craft beer scene and they are poised to become a new staple in the “think globally, drink locally” movement. This new phenomenon was brought to my attention by a long-time friend of TBH and an all-around excellent writer (who has a great personal essay on the joys of that oft-maligned and wonderful institution of drinking alone), and I must say that it was completely foreign to me. At first I thought it must have been a typo: surely she meant “growler,” I thought while trying to rally just enough to make it to work on time. As usual, I was so very, very wrong. And so very, very late to work.

Crowlers are now officially a thing, and a rather curious thing at that. By now you at least know about the traditional half-gallon (or so) glass jugs that your local brewery (or in my case, bagel place) offers so that you can enjoy a fresh-from-the-tap brew without the hassle of having to be, you know, anywhere near the tap. The benefit: you not only have the makings of a sweet, sweet jug band in hand, but you also have an economical way to take some truly great beer with you for the bus ride home among the unwashed masses. It should be no surprise that smaller craft brewers have adopted the growler since it lets someone who loves their beer to take a jug of it from where it was born out into the wide, wide world and maybe share some and get more people interested in it.

On the heels of growlers, crowlers have come on to the scene as another high-volume beer conveyance system, albeit with some technological draw-backs. Of course, the chief draw-back being that requires a whole new set of machinery to make it work for the brewer/vendor. In short, the crowler is just a 32 oz aluminum can that can be filled at a tap, sealed (and here you see the problem), and carried out just like the good-ol’ glass growler. The difference being that a growler typically has a simple twist-cap closure while the crowler requires a new machine to affix an aluminum pop-top closure to it so that you can, you know, open the damn thing later.

It is hard to not be biased right now–I have great memories from my time in Pittsburgh of driving to the sketchy-as-hell address of the East End Brewery to get a couple of those iconic glass jugs filled for an evening with friends, or of visiting great out-of-the-way joints like Atlantic Brewing in Maine and walking away with an armful of happiness and delight stored in those sturdy little jugs. Growlers feel like a throw-back to an earlier time, like a trip back to a simpler way of life where you could get to know the person that made what you were drinking. It feels more honest, more genuine, and more immediate. It feels like possibility.

But I can see the draw of the crowler: it keeps all light out, which can spoil a beer (especially if the beer in question is heavily hopped); it stays carbonated longer than in a growler (if that is a concern for you); and it does not have the same risk of breaking as a glass container. However, let us break down the pros and cons of this new arrival on the scene:

Pro: it preserves the beer longer!

Okay, granted. The crowler keeps light and air away from beer better. If you want to pick up 32 oz of some local brew, a can is clearly the better choice when it comes to preservation. Case in point: a glass growler keeps it carbonated and fresh for about three days, while a crowler can extend that to 30 days or so.

Con: why are you keeping it that long?

That is an honest question. Who in their right mind would think “Jeez, that’s a lovely IPA they make downtown, and I might want to enjoy that four weeks from now. I should pick some up!” The same twisted soul that would utter that nonsense is likely the same person to have some strong opinions on the best kind of odor-absorbing crawlspace sealant you can pick up on your next hardware store run for rope and bags of lime with no questions asked.

Here is the kicker: a crowler cannot be closed once it is opened. With a glass growler you have a twist-cap if you (Bacchus forbid) have any left over and need to store it for another day. Once you crack an aluminum can, you are in it until the bitter end. So if that crowler is not just for you, then you better be sure that it is getting killed the night you open it, or else what is the point?

Pro: it won’t break as easily as a glass container!

Aluminum is pretty forgiving, and it travels better than glass. Whereas you might risk cracking or shattering a glass jug, an aluminum can would only dent.

Con: where the fuck are you taking this?

A few things: first, if you are travelling by plane, then yes, glass is a bad idea. But so are liquids in that volume and in any kind of pressurized container. If you are travelling by train, then no one gives a solitary shit. The point is moot. If you are driving and want to bring a local microbrew to the party, then it does not matter if it is glass or plastic–throw an old shirt over the growler to keep it from light-spoilage and you are good to go.

Also, if you are so bad at getting from Point A to Point B that you would end up shattering any glass vessel you were carrying, then you need to just get good and comfortable with Point A.

Pro: you might not have glass recycling available where you live, but aluminum recycling is virtually everywhere!

You might, like I do, live somewhere that does not have a way to recycle glass, and that can change your drinking habits if you want to get good and loose but still be environmentally responsible.

Con: crowlers are wasteful and pointless.

The whole point of a growler is that it is reusable until you up and break it. Crowlers, as far as I can tell, are either one-time use containers or would need a new top every time you fill it. Point: growlers. Also, if you have a pile of empty glass growlers lying around, that just paves the way for an American jug band revival. Jug band festivals would just give the hipsters something new to do, and those hipsters would be the ones buying the new crowlers anyways. It’s a problem that solves itself.

Honestly, all hail the crowler! Sure, it’s new and novel and a bit kitschy, but it shows that the brewers and the drinkers of this country are a crafty and innovative bunch. The reason we have NASCAR is because of the innovations of bootleggers during Prohibition. The reason we have commercial refrigeration and personal refrigeration technology is largely due to the brewing industry. We see problems, we (sometimes) create solutions.

Whether or not the crowler is practical, our people came up with it and that is pretty damn cool. Cheers.