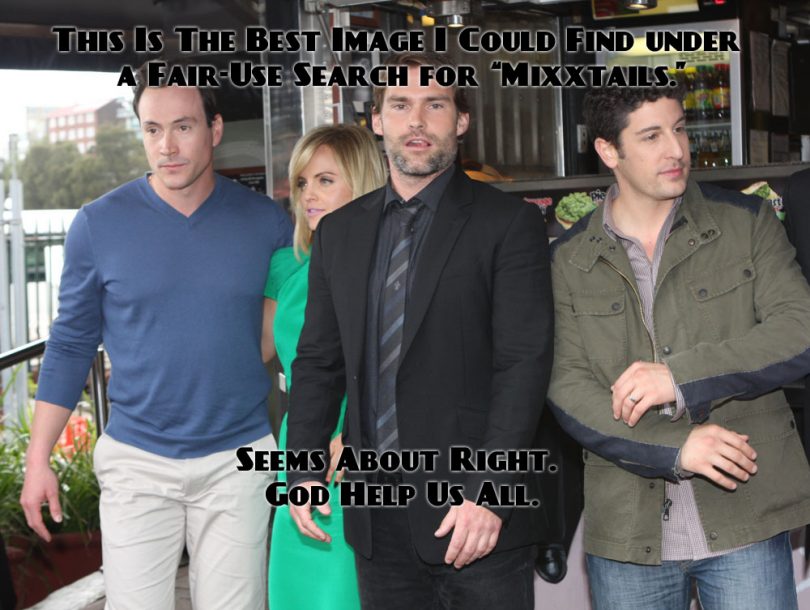 As the honorable Mr. Dent has noted, malternatives (a term that smacks so much of advertisers pretending to be clever that it stings) do seem to be on the rise. I concur with him that these alcoholic abominations may very well be the direction that macrobreweries will have to take viz a viz the growing craft beer market and an ever more informed and discerning beer drinking public. We used to have just a handful of options, available just about everywhere, with a few cheap brews from local and long-standing (but never very successful) breweries for some local color.

Take Rainier, a staple in the liquid diets of the plaid clad ape-folk that live in Washington state. It started a little more than a decade before Washington was even admitted into the Union, ran pretty much continuously (excepting the dark days of Prohibition, of course) until it was officially shut down in 1999 after changing hands a few times. You can still find it these days because the brand was bought and sold so many times that it is now proudly produced in. . . California. It never got the national standing of a Pabst, or even a Stroh’s (even though they both owned the Rainier brand), but it was a regional darling. A regional darling that is now contract-brewed by MillerCoors in another state and still remains unknown to most.

If you hate everything on the west coast, then take the similar case of Rolling Rock, a watery, forgettable creation that gave Latrobe, PA, something the finally be proud of (other than the collective restraint to have only one Taco Bell). Rolling Rock started in 1939 and was a Pennsylvania staple until it was sold to Anheuser-Busch in 2006 (prior to AB’s acquisition by In-Bev) and production was moved to Newark, NJ. There were protests–boycotts, even. But the brand continues under the uncaring supervision of a major corporation still trying to peddle the blue-collar charm of the Rock’s origins, as is the fate of many such labels.

Did you notice something there? The timing. Somewhere in the late 1990s and into the 2000s, some well-established and long-lived brands were getting snatched up by the same major companies (MillerCoors and AB In-Bev respectively) that were starting to bank on malternatives instead. As in the kinds of products that appeal to people who do not give a single solitary shit about what they are drinking due to either ignorance or a Zen-like acceptance of all things no matter how horrible and unholy.

Two thoughts come to mind: first, the cheesy mixed-drink-in-a-can-because-you’re-too-lazy-or-incompetent-to-make-one fad is just a fad and will hopefully go away; and second, this kind of decadent “have anything you want made and prepackaged for you” attitude towards the Creature is a sure sign that our civilization is officially in decline. I tuned out during most of the BBC’s “Ancient Rome” documentary, but I’m pretty sure that the Bud Light Lime-a-Rita preceded the Goths across the Danube.

My main contention is that these kinds of creations do two things: they either provide the White Zin version of malted beverages in a hyper-sugary drink that’s more likely to give you diabetes than cirrhosis, or they make the offensive presumption that a pre-mixed cocktail is just as good as one you make yourself (or have made by a good bartender). To the former point, I can be reasonable. If that kind of syrupy sweet swill is your jam, then cheers. You do you. As long as we don’t bring back “bros Icing bros.” If you are not familiar with the practice, just know that it originated with frat boys in the South with a surplus of readily available Smirnoff Ice. I count three strikes in that sentence, so if I know my ‘Murican sports, that’s an out.

To the latter point, that’s where the red mist descends. If you want a Mai Tai, take a minute to learn how to make it yourself. Or just find a bar with a bartender that looks vaguely competent. Making a cocktail is like making anything else–it just feels better. In the mood for a Margarita? They’re not hard to make for yourself. Just listen to our greatest animated inebriate explain what you need. You’ll learn a valuable skill. You’ll feel some pride in making something just for your enjoyment. Think about it this way–what feels better: learning a new casserole recipe, finding the ingredients, preparing it all, and then looking down on your creation and saying to yourself “I have made this. This was nothing before I put my hands to it, and now I get to enjoy the fruits of my labor;” or would you prefer a Lean Cuisine partially heated in the microwave? The salt from your tears does not count as seasoning, by the way.

The kind of decadence that makes the easy option seem like the better one is what leads great nations and great people alike to take the low road into darkness. That’s the kind of claim Nietzsche would have made, and that scraggly bastard was full of enough syphilis to take out half of Panama City during Spring Break. If the malternative trend continues, it will only be a matter of time before the walls crumble and we will have to rebuild.

Or it will just lead to a stronger showing of support for local brewers and distillers, which would be welcome.

Or it could just be fine. Predicting where the booze industry is going is a lot like predicting the weather: the only people who claim to really know what’s going to happen are tubby white guys in off-the-rack suits who look like they haven’t been outside since the Carter administration.

Still, we’ll be here, come Hell or high water, to toast either the inevitable downfall of Western civilization or to join you in a hearty drink. So, no worries.