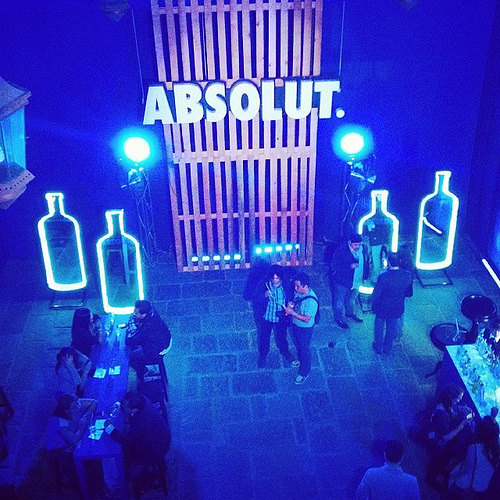 You didn’t ask for it, but you’re getting it anyway. As noted here at The Brutal Hammer, Absolut is set to thrust a bourbon-flavored vodka on the world. More than just another flavor-infused booze, this is, I believe, the first time one type of spirit has ever tried to cross-dress as another type altogether.

Stranger still is that the imitator is Absolut, an iconic brand. This Swedish sauce was invented by one Lars Olsson Smith in 1879, when Smith created a process to remove most impurities from vodka during distillation. “Absolute pure vodka,” Smith modestly pronounced the finished product.

For a century Absolut was little-known outside of Sweden, but in 1980 the company decided to go international. The brand re-launched in new bottles, reshaped to resemble traditional Swedish medicine bottles and with no paper labels. Instead, the logo was etched right onto the glass. This practice is commonplace now, but Absolut was the first to ever try it.

More importanly, Absolut hired an outfit called TBWA Advertising to pitch the vodka to consumers, and the rest is history. Absolut ads followed a typical pattern: a two-word slogan (“Absolut Perfection,” “Absolut Wicked,” etc.) against a background of elaborate artwork that was often a puzzle, inviting the viewer to figure out the hidden meaning. For a while in the 90s the print ads became collector’s items, and news vendors reportedly razored the ads out of magazine copies to sell separately on the sly. They made Absolut vodka hip and made everyone involved with it a lot of money.

In 2008, Pernod Ricard won a massive bidding war for Absolut and bought out the company for $8.3 billion. Coincidentally or not, from that point on Absolut lost a lot of its hipness. It’s still a good seller, but now brands like Ciroc, Ketel One and Belvedere (now the vodka of James Bond) have pushed Absolut out of the limelight. Thus Absolut’s bid to become relevant again, Absolut Oak:

There’s no question Absolut faces a formidable landscape, between all the other luxury vodkas now on the market and the resurgence of brown spirits. Although it is still the number-one imported vodka in the United States, it has lost its place in the bar. You just won’t find it on the top shelf with the possible exception of the pricey Absolut Elyx, which itself is hard to find. The iconic ads have disappeared but nothing has properly replaced them (unless you count this high-concept commercial as somehow resonating). There’s even an ongoing redesign of the very bottle that made Absolut famous in the first place.

The idea behind Oak, it seems, is not to convert bourbon drinkers but to give loyal vodka fans a chance to hop on the bourbon bandwagon. The Absolut Oak website claims it is “perfect for composing cocktails previously reserved for darker spirits,” and recommends customers try it in an “Oak and Coke.”

Will it sell? Absolut has pulled off some startling innovations before, from the bottle re-design to the unique and ingenious advertising, so maybe they’re on to something. But I can’t imagine ever buying the stuff myself.