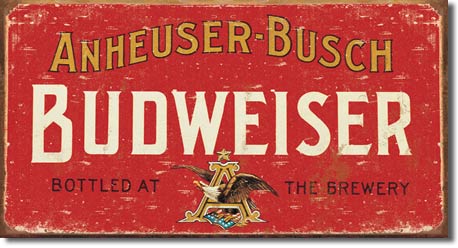 LEUVEN, Belgium—Anheuser-Busch InBev, the undisputed dominant ruler of the global beer market, employs a lot of smart people. It’s highly doubtful that they operate obliviously to the fact that their products, for the most part, are tepid hogwash. Therein lies the company’s brilliance—it is the Worst, and it is King. Selah.

It should scarcely be considered surprising that AB Inbev is making escalating inroads into the craft brewing industry, gobbling up rising stars as this dispatch from MarketWatch’s Jason Nott so chillingly conveys. According to Nott, this will inevitably, undoubtedly continue.

We say it because it’s happening.”

It’s not the first time that MarketWatch has sounded the alarm on the encroaching imperial menace, but frankly, the idea that AB InBev wouldn’t do this eventually has always been a fairy tale. Apart from MillerCoors, the company’s only real rival is a communal one—the huddled masses of the craft beer industry and its consumers, swilling saisons and black IPAs in uncoordinated bloc resistance. It should be no surprise that they would start worming their way into our rank and file—every war has its turncoats.

I say let them go. If brewers want to sell, let them sell. No matter who they are, they’re only one of thousands more.

And this, this simple fact—this is where we win, because this, they cannot change. However massive the many-headed hydra of AB InBev becomes, no matter how many of our breweries they buy up, someone will always be able build another. And they always will.

And that, my friends, is why I’m not saying boycott. I’m not saying panic. Don’t even worry! I’m saying to keep on doing what you’re probably already doing—drinking lots and lots of independent craft beer, enjoying the broad and growing variety of this budding Golden Age.

I feel for fans of those breweries that have already been subsumed into the vicious golem. Deeply and truly. They face an identity crisis due to these deals with the devil made without their consent. To them I say, mourn not for long. So your favorite brewery sold out. Be happy for them—they made a payday. They don’t need your help anymore. Hundreds of holdouts do. Hundreds of holdouts always will.

So raise a glass of homebrew, friends, and breathe easy. The monsters may be at the gates, but we outnumber them. We’re fine.