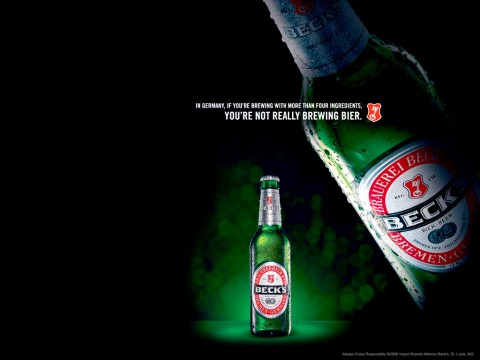 Back in 2008, when InBev bought Anheuser-Busch, the takeover was touted as a formidable alliance between three classic beer brands: Budweiser, Stella Artois, and Beck’s. But now, thanks to A-B InBev’s own greed and corner-cutting short-sightedness, one member of that mighty triumvirate, Beck’s, has been dealt a devastating blow.

Venerable Beck’s Brewery was founded in Bremen, Germany in 1873, and remained in local hands until 2002, when it was absorbed by Interbrew, the precursor to the InBev empire. Six years later, the all-devouring maw of InBev consumed Anheuser-Busch. In 2012, in a cost-cutting move, A-B InBev moved production of Beck’s out of Germany to St. Louis, Missouri.

Fair enough, it’s their product. But A-B InBev continued to give the impression to U.S. consumers that Beck’s was an import, and priced it accordingly. The inevitable class-action suit followed, and a federal court ruled in favor of the plaintiffs (the decision is viewable here). A few weeks ago a settlement was announced: hoarders who kept their Beck’s receipts are entitled to a refund up to $50; those who didn’t, can get a refund capped at $12. A-B InBev can absorb this financial hit, but whether the Beck’s brand can survive the blow to its reputation is less certain.

A-B InBev has no one to blame but themselves. As the court noted, among their many deceptions was the claim that Beck’s adheres to Germany’s famed “purity” laws:

This claim is false. The German Purity Law
of 1516 allows only the inclusion of barley, hops and water in beer, and Beck’s contains yeast
and other ingredients and additives.

If you look really hard at the label on a Beck’s bottle, it does say “Product of USA” — in tiny white text against a silver background. But it does not say so on the cardboard packages that 6- and 12-packs come in. Sure, the buyer should always beware; but at the same time, the buyer shouldn’t have to rip the package open to get the information he or she needs.

Then there’s the claim that the beer “Originated in Bremen, Germany.” And a reference to “Brauerei Beck & Co.”, a company that the court found doesn’t exist. And on and on. All of this elaborate subterfuge was coordinated as part of a pre-arranged scheme:

To maintain that (now false) brand identity, AB
maintained all of the German references on its packaging, deceiving consumers that Beck’s was
still German, brewed in Germany with German ingredients, as part of a scheme AB called
“Project Schnitzel,” and then “Project Green.”

It’s almost a parody of corporate greed, stupidity, and nefariousness.

The ridicule has already begun. Competitor Warsteiner recently put up a 15-story digital billboard in Times Square, with the simple message: “Warsteiner. Premium German Beer From, You Know, Germany.” Warsteiner’s homepage carries the same message, with the added admonition, “Do it right.”

It’s hard to see how the Beck’s brand survives this, at least in the North American market. Whatever pain A-B InBev suffers as a result would be well-deserved. Still, it is a shame to see the old and respected Beck’s label so degraded.