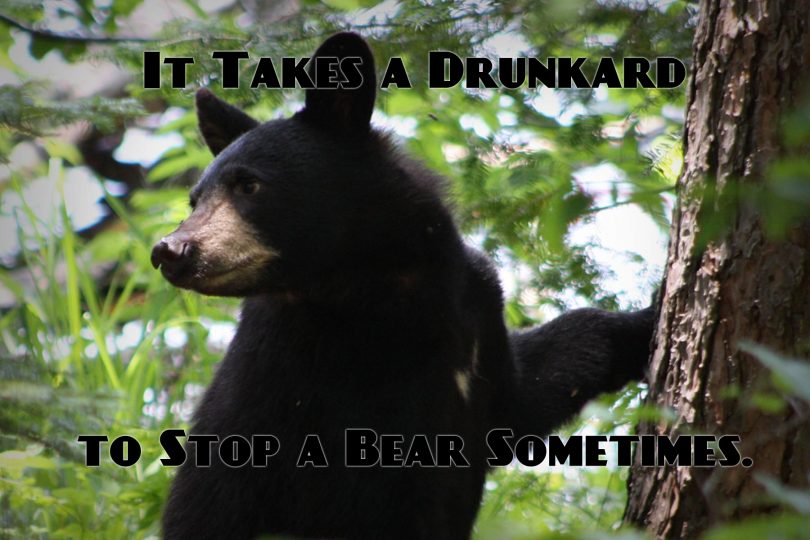 Here’s a secret: I rely on the Brutal Hammer for most of my news, too. And damn if it didn’t deliver yet again. An upstanding drunkard recently made news for saving innocent school children by chasing down a black bear with nothing more than a Grizzly Adams-esque determination and a hatchet that apparently could use some sharpening. Number of children brutally mauled by bears that day: zero. Number of American heroes arrested for protecting them like a plastered patriot: well, one.

Like much of our great nation’s history, this story was born of an average man in a quiet town in one of the original Colonies looking danger in its beady little eyes and saying “Not today. Not here. Not before I’m sober.” The town of North Adams, Massachusetts, is, by all evidence, a quaint little town where not a lot goes horribly awry, so you wouldn’t expect its citizens to be used to threats of grave danger. That kind of comfortable living can breed complacency and a false sense of security in even the most vigilant citizen, but the unnamed hero of this story was no ordinary citizen: he was a drinker. A proper one.

The news story linked above was a fine piece of local journalism (in all honesty–it’s a solid piece of work), but its author, Mr. Dan Glaun, is clearly not among our noble ranks. Normally, I’d let a story like this slide as another hilarious bit of curiosity, but this little bit caught my eye:

The Facebook post, written in a tone of despairing confusion as to the bear-chaser’s thought process, went viral; it has been shared over 4,000 times and inspired a deluge of calls from news organizations, [North Adams Police Sgt.] Burdick said.

A “despairing confusion as to the bear-chaser’s thought process”? Perhaps I can shed some light on that one.

Picture this: you spot a black bear in a park near a school. You’re savvy, so you know that black bears have sharper claws than grizzlies, and all bears are nothing more than God’s furry murder machines sent to cull the human herd of the vulnerable, the slow, and the weak. You’ve been drinking to keep your instincts honed and your body loose, should a bear-related incident present itself. You’re on that wall, ready to lay down your life to protect your community. When you spot that bear, you remember exactly where you keep your good, less-than-ideally-sharpened bear-striking hatchet. It’s not like you just have a full ax on hand–you’re not crazy, after all. You know that the children are our future (not yours, because you don’t plan on living long enough to collect Social Security), so you spring into action and charge after that hairy bastard like you’re the last damn defender of Rome staring down the invading Visigoths. You think about calling the police, but their response time is nowhere near as immediate as yours. Besides: you’ve got this.

A teetotaler would hem and haw over the most “appropriate” reaction, considering what might be best for the bear and whether or not their insurance would cover the inevitable personal liability issues in this matter. They would eventually call the police, and the 5-0 would eventually turn up with guns to scare it off. That’s more than enough time for our ursine antagonist to have carved a bloody swath through the town’s tiny, tiny children as they broke for recess, blithely expecting to feel the same joy that they feel everyday in their safe little town. Thankfully, there was someone around who saw through that danger scenario and straight into the best solution: a full-on hatchet chase. Granted, fatalities from bear attacks are not a major concern to most of us, but why leave it to chance?

I have the strong sense that his side of the story will not be adequately heard, so as his unofficial PR person, here’s a quick set of rebuttals:

First, from one of Mr. Glaun’s article:

“He’d had a few too many to drink,” Burdick said. “When the bear came out, he thought to protect the children it’d be a good idea to chase the bear with a dull hatchet.”

The primary objection here: “a few too many drinks” would leave him unable to locate the hatchet, let alone accurately chase that bear. I contend that he had just the right number of drinks to stand up and defend our most vulnerable citizens–the children.

The man was taken into protective custody by police and inspired an officer on social media duty to post a warning to other amateur forest rangers not to follow in the man’s footsteps.

Well, come on. As though small-town cops are better qualified than the average citizen to act as forest rangers? Those are different skill sets, and the admonition is unwarranted. This unnamed man is a goddamn hero, and the booze was there to support him every step of the way. He is a living, breathing Berserker like the Norse legends of old, and he got the job done. And without taxpayer expense, to boot.

And though many have found the post amusing, the issue is a serious one, according to Burdick – both for residents and the bears themselves. The department’s goal, he said, is to deal with bear encounters non-violently, but if a person antagonizes a bear and it attacks, officers may be forced to put it down.

That just sounds like a warning against calling the cops. The lesson here seems to be that if you’re well enough into your cups to chase a bear with an improperly maintained medieval weapon, then make sure you either get the job done or die in such a way that your tombstone will be an inspiration to others for generations to come.

The broader point here is that sometimes the answer to a dangerous situation is to find the drunkest sonofabitch around and say “Hey–still got that hatchet? ‘Cause we got a bear that needs chasin’.” That he was detained after such a selfless act of community-mindedness is sad, and I hope that the North Adams PD acknowledges his heroics. It goes to show you that a good drinker can rise to any occasion, any challenge, and they can be the most news-worthy of our unappreciated first responders.

Unless they get eaten by bears.

As an aside, I’ve contacted Mr. Glaun for his opinion on this matter. If he cares to weigh in, you’ll be the first to know. Honestly, he’s a good journalist, and I hope he does.

UPDATE: Mr. Glaun is a classy, professional journalist, and as such has politely declined to comment on the story. Another news outlet, however, may have obtained the mysterious hero’s name, so I’m going to try to go straight to the source. Stay tuned.