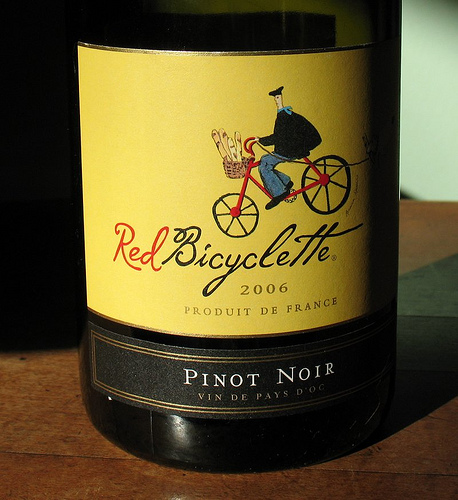 Red Bicyclette, the brand of cheap, faux-French wine peddled by E & J Gallo Winery, is still around. This isn’t news, but it’s a surprise to me, considering RB was at the center of one of the bigger scandals in the often-scandalous wine world just five years ago.

Red Bicyceltte debuted in 2005, and owes its existence to the film Sideways, which opened in theaters the year before. The brilliant buddy-movie about a road trip to California wine country became an unexpected smash hit, and inspired many thousands of people to get into wine who might otherwise never have given it a thought.

It also created the so-called “Sideways Effect.” The main character in the movie, a wine-snob named Miles, declares his love of pinot noir grapes and his hatred of merlot, at one point screaming, “I am not drinking any fucking merlot!” Moviegoers took their cue from Miles. Sales of merlot plummeted, while demand for pinot skyrocketed, to the point that demand outstripped the supply of pinot grapes in the U.S.

The Gallo folks, well aware of the Sideways Effect, struck a deal with a French company called Sieur d’Arques to supply them with pinot grapes from the bulk market. For Gallo it must have seemed like a double-win: Circumvent the pinot shortage at home, and get a product they could market as a French import (however indirectly) to boot. So was born Red Bicyclette. The Gallo-designed labels touted it as a “Produit de France” and, in case you missed the point, were decorated with a cute cartoon of a stereotypical beret-wearing Frenchman delivering a basketful of baguettes on his bicycle.

Red Bicyclette debuted at $8 a bottle, awfully cheap for a pinot, and sold well. But all was not as it seemed. It turned out that the perfidious French were duping Gallo (and U.S. customers), selling them not pinot but syrah and merlot(!) at inflated, Sideways Effect pinot prices. The scam was only revealed after several years, when a French official looking at the books discovered that Sieur d’Arques was selling more “pinot” grapes than the entire Languedoc-Roussillon region could produce.

In 2010, twelve French conmen were convicted of fraud and fined — but none served jail time. Gallo was never even investigated. The Gallo people claimed to have relied solely on the contract they signed with Sieur d’Arques to fulfill its obligation. Apparently no one at Gallo ever bothered to try Red Bicyclette; or, if they did, weren’t knowledgable enough to realize they were being had.

Gallo did end up paying $1.15 million in settlements to misled customers, a trivial amount to the world’s biggest winery. Aside from the embarrassment, that’s all the price Gallo paid. You’d think Red Bicyclette would have been garaged after the scandal broke. But no. It’s still out there, even a little pricier than the $8 it used to be, and now available in other varietals besides pinot (but not merlot).

Sieur d’Arques also seems to be doing just fine. Their website even has a page devoted to describing the company’s “commitment to quality.”

If there’s a moral to the story of the Red Bicyclette scandal, I’m not sure what it is.