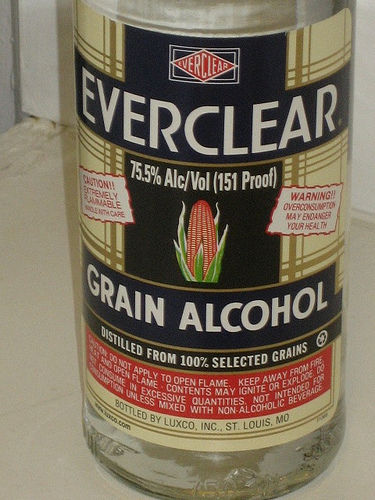 Good news: As of this month, Everclear “Lite” (the 151 proof version) is legally available in 49 of 50 states. Virginia approved the sale of some high-proof grain alcohol in the Commonwealth beginning July 1st, leaving Vermont the only state still holding out.

The bad news: Full-bore 190 Everclear is still illegal in more than a dozen states, Virginia included.

How come? University of Virginia president Teresa Sullivan, during the debate over grain alcohol legalization, likened Everclear to a “date rape drug.” That’s what most of the opposition amounts to wherever the subject is debated. Neighboring Maryland, when it outlawed the high-proof stuff in 2014, did so on the grounds of curbing “college sexual assault.”

Everclear’s evolution into a so-called rape drug is a recent development. The brand first appeared back in 1950, a creation of the long-gone American Distilling Company. Booze distributor Luxco acquired the label in 1981 and still owns it today. Through all these years it’s never been advertised, never pitched to entice college students or the party crowd, and barely acknowledged. If anything, Luxco has tried to clean up Everclear’s image, quietly pointing out its uses as a blank canvas for adventurous mixologists:

“Are we dumping it into a trashcan? No. We’re creating something with it, something that is not available in stores. That appeals to me.”

To be sure, more Everclear winds up in bins of frat-house Jungle Juice than in the hands of home bartenders. But the alleged link between booze of any kind and sexual assault has always been dubious, not to mention insulting to victims:

In any case, grown-ass adults ought to be able to choose what alcohol they want to buy and how they want to consume it. That’s the real issue. Everclear won a minor victory this month, for themselves and for personal liberty. Whether anything will come of it is a little more murky.