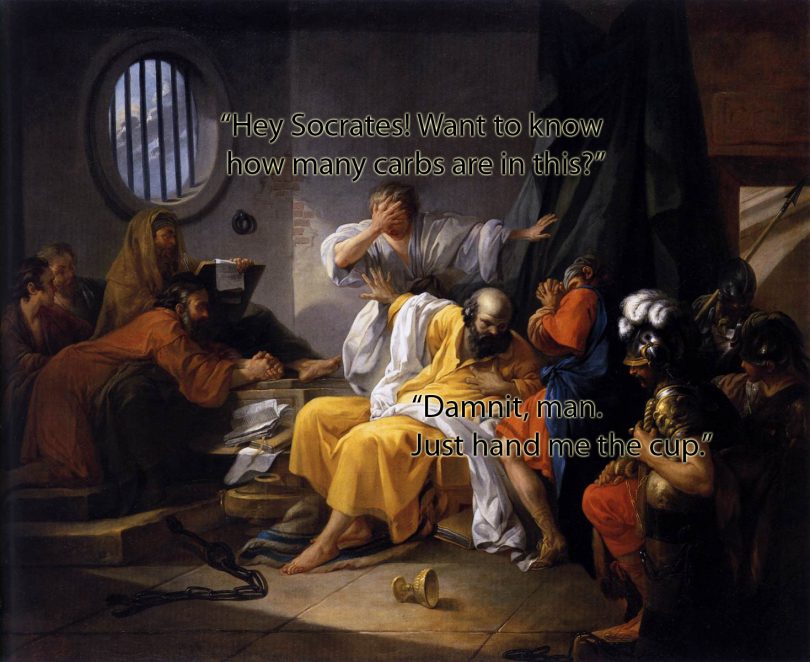 Yes, an ill wind is indeed blowing across the fruited landscape of breweries and the drinkers that are besotted with them. Or at least there is something creeping into the beer market that has a suspicious air about it. The Beer Institute recently announced that its members (or at least a number of them) would be implementing their Voluntary Disclosure Initiative, a program aimed at putting nutritional information and a list of ingredients on their member-brewers’ beers. Fellow Hammer Sarah Szabo wrote about this looming issue last year (which prompted this counterpoint), but what we have here might just be more sinister than a good-will gesture of transparency by Beer Institute members: this smells a hell of a lot like a cowardly, sneaky, low-down push by the likes of AB-InBorg to make life harder for smaller and up-start breweries by worming their way into future TTB regulations.

On its neutered, bureaucratic face, the Voluntary Disclosure Initiative seems innocent enough–it is, after all, voluntary and even those brewers who do adopt the disclosures could still opt to only disclose the basic nutritional info and leave off the ingredients, or they could opt instead to place a QR code on the label that links to the information online.

As it stands, it’s a paper tiger and has no force of law behind it. However, methinks this is the first step in another offensive against smaller brewers designed to burden them with additional future regulations. Those will inevitably drive up costs and hurt the little guys who want to get into the glorious game of beersmithing. Also, it probably has something to do with one mouthy, ignorant, and scientifically illiterate imbecile who has already made her utter incomprehension of science known in an attack on New Castle Brown Ale. We’ll get to that in a moment, though.

So, who are the Beer Institute and the TTB?

The Beer Institute boasts an impressive membership count that encompasses around 80% of all domestic beer sales:

The Beer Institute, based in Washington, D.C., represents the $252.6 billion beer industry – an industry that includes over 3,300 brewers and 1.75 million American jobs. The Beer Institute is a national trade association for the American brewing industry, representing both large and small brewers, as well as importers and industry suppliers.

We know that Anheuser-Busch, MillerCoors, Constellation Brands Beer Division, and Heineken are all members, but a complete list seems impossible to find online. No matter, since the presence of AB, MillerCoors, and Heineken–three major players known to dominate nearly half of the global beer market–is cause enough for concern. While the Alcohol and Tobacco Tax and Trade Bureau (TTB) is the primary regulator of the alcohol industry in the States, it is the FDA that oversees the content and the accuracy of nutritional labels on consumables. While the FDA usually only spot-checks some nutritional labels or responds to complaints from consumers, any discovered problems could result in a costly product recall.

Let’s imagine how this will go.

A small craft brewer could try to wing-it when designing and filling out an FDA-compliant info label, but that could result in a world of regulatory and legal hurt if they get something wrong. Others have urged businesses to hire a qualified label consultant, which itself can be costly. And that is saying nothing about having a qualified lab test your product for exact amounts of fat or protein or sugar or what-ever-the-hell else for each and every new beer you try to bring to market. Take a wild guess as to who will be underwriting those costs–it’ll be each and every one of us hunkered up against the bar trying to support our local breweries.

Now, if a brewer is not already a member of the Beer Institute, this is currently a non-issue. However, this is a strange thing for major brewers like AB and MillerCoors to do. AB-InBev/SABMiller have been buying up smaller craft breweries for years, and in states like Colorado they are none-too-welcome because of it. With their aggressive stance towards buying out and pressuring their smaller competition, this Voluntary Disclosure Initiative looks like just another sneaky tactic.

I see it playing out like this–first, the voluntary labeling starts to happen; second, consumers get used to seeing them and come to expect them on every beer they buy; third, consumers start to complain that not all beers carry their precious nutritional information because goddamn it I need to know how many I can drink and still fit into my Lulu Lemons; and fourth, the TTB is pressured to require all beer to carry those blasted labels. Smaller breweries will have to invest more money into testing and labeling, driving up their operating costs and making their lives even more difficult.

But why do I think this will happen?

There is no force more capable of demanding regulatory change on consumer goods than loud idiots, of which there are plenty. In general, people do not want to be informed, they want to feel informed. Being informed requires a certain amount of working knowledge and understanding, but feeling informed doesn’t require a damn thing.

Unless you have specific allergies or major dietary concerns, you don’t need most of the nutritional labels that already exist on your food and drink. You don’t even really look at them, and when you do you sure as shit do not remember the percentage values or most of the ingredients. You never adhere to the serving sizes–no one does. However, you feel informed about your choices, and you want that feeling from everything that you buy. You might not be able to tell LDLs from HDLs from your own ass, but you like to think that you know what kind of cholesterol is in your Hot Pockets.

And this brings me to the loud, scientifically illiterate health-scam shill I mentioned earlier. In 2014, she launched a campaign of ignorance against New Castle Brown Ale to get them to remove the Caramel Color III that they were using to help give it that distinctive amber tinge. In steps Vani Hari (aka The Food Babe) who writes them to voice her concern that Caramel Colors III and IV (which contain trace amounts of 4-methylimidazole, or 4-MEI) are “known carcinogens” due to a study in which lab mice were exposed to more of the stuff than any human would ever encounter. Yeah, they developed cancer. . . kind of, and only after a two year study that was otherwise inconclusive. On top of that, the FDA has declared (after getting sciency-people who know what they’re talking about and have reviewed the literature) the following about our exposure to 4-MEI:

Based on the available information, FDA has no reason to believe that there is any immediate or short-term danger presented by 4-MEI at the levels expected in food from the use of caramel coloring

Oh, and not mention the fact that 4-MEI naturally occurs when you, say, roast coffee beans or when you grill a steak or cook any number of other foods.

And double oh, Caramel Colors III and IV (due to 4-MEI) are listed as class 2b carcinogens, which is a category of chemicals that have the outside potential to cause cancer in humans but which have never been linked to a known cancer case.

And triple oh, why the shit would anyone worry about getting a class 2b possible carcinogen out of beer when alcohol is a goddamn class 1 (aka known) carcinogen? We know that alcohol can cause cancer. We stopped caring so much about that because life is about rolling those cancer dice and having a stiff drink while waiting to see where they land.

New Castle bowed to her loud ignorant pleas (as did Subway when they removed a harmless dough-softening agent from their breads after she pitched an uninformed fit). It is the kind of anti-science, anti-intellectual nonsensical worrying crowd that just loves that sense of feeling informed about their food and drink without actually being informed. If loud idiots like The Food Babe Army can make major companies change their ways in the presence of sheer ignorance, then what do you think will happen when these muppets get a whole new crop of nutritional labels to dissect and then not understand?

If you learned something about the classifications of carcinogens through this article, take a moment and reflect on what a difference actually being informed makes. Then think about whether more labels on your beer would actually do the same for you or just make you feel like you’re more informed.

It all seems like a long-game played by the biggest brewers in the business to rile up the dumbest among us and pile new burdens on the little guys out there. With the force of so much stupid out there just waiting to cry out against things they can’t pronounce, a small push like this voluntary disclosure (which already seems to pander to them) could snowball into more legal headaches for small-time brewers down the road.

I have a knack for being incredibly wrong on some big issues, so here’s hoping this is another one to add to the list.