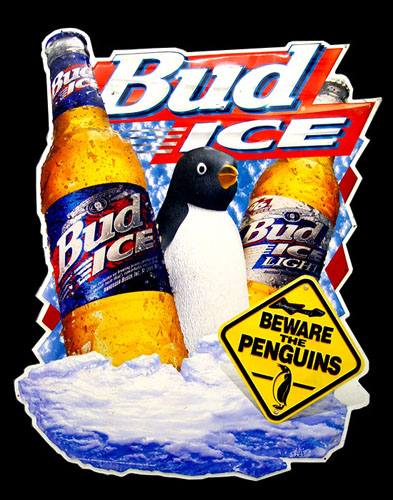 A moment of silence for one Charles Parker, who (as noted last week by The Brutal Hammer) was beaten to death by a roommate who thought he stole his Keystone Ice beer. A mere three punches did in the unfortunate Mr. Parker, and he wasn’t even the guilty party.

Sadder still is that Keystone Ice and its like are still around, and that anyone would fight over the chance to drink it. A brief fad of the 1990s, generic ice beer has lived on long past its expiration date.

The technique of making ice beer is nothing new. Eisbock has been brewed in Germany since at least the 1800s. The beer is stored at below-freezing temperatures so that ice crystals form, then are filtered out. What remains is a beer with a higher alcohol content. In the case of genuine Eisbocks, some connoisseurs find them smoother and more tasty.

But the ice beer that showed up in North America in the early 90s was no Eisbock, just slightly more boozy than standard crap beer. Molson and Labatt (it’s still debated which of the two came first) debuted their ice beers in Canada, and both turned into big sellers.

American macrobrewers jumped on the bandwagon. Miller’s Icehouse brand, at 5.5% ABV, became the first American-made ice beer in 1994. Anheuser-Busch followed with Bud Ice. TV ads for Bud Ice featured a sinister, singing penguin that had a brief moment of glory.

Coors came up with a brand called “Coors Artic Ice” — and claimed that the misspelling of the word “Arctic” was deliberate. “We don’t think of it as a misspelling. We think of it as alternative spelling,” a Coors spokesperson insisted at the time. Meanwhile, Coors’ rivals had fun pointing out that Coors Brewing was a founding sponsor of the “Literacy. Pass It On.” initiative.

They all tasted the same, and most consumers figured out by the end of the decade that they were being had. The fad passed; and yet most of these brands are still alive today. Bud Ice can be found, at least in St. Louis. Miller claims to brew “millions” of barrels of Icehouse, Keystone Ice, and Milwaukee’s Best Ice every year.

Maybe in the 90s, when beer options were few, there was some reason for the ice beers to exist. But in 2017, anyone thirsting for strong beer has far more options than macrobrewed ice beer, and far better.