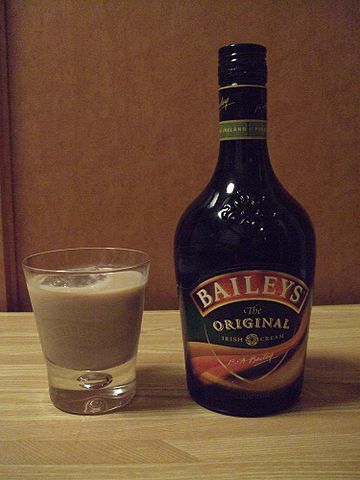 More a dessert ingredient than real booze, Baileys Irish Cream nevertheless continues to march on. Baileys routinely sells over 6 million cases a year and is easily the best-selling liqueur in the world.

Not everyone is a fan, though. Detractors call it “Celtic muck” and “a horrible thing to do to whiskey.” Safe to say, Ireland’s most renowned export is in the Love It or Hate It category.

One good reason to hate it is its fakeness. Baileys was cooked up in the 1970s to appeal to women drinkers who (it was thought back then) couldn’t handle whiskeys and stouts. Named after nobody, even the “R A Bailey” signature transcribed on the label is bogus. As told in the book Big Shots: The Men Behind the Booze, some marketing geniuses decided to call their new product “Baileys” mainly because the name sounded authentically Irish. There never was anybody named Bailey — R, A, or otherwise — involved in its creation.

It’s also a feeble drink, at a mere 17% ABV; but parent-company Diageo has contrived a way to weaken it further: Behold Baileys Iced Coffee, launched on an unsuspecting world just this month. It comes in a can and weighs in at a paltry 4% ABV, which makes you wonder why they bothered putting alcohol in it in the first place.

Baileys bills itself as “The Original” Irish Cream, and that at least is the truth. An army of knockoff Irish Creams imitate Baileys — Molly’s, St. Brendan’s, Carolans, and on and on — in various degrees of sugar overload. If there’s any genuine difference between any of them it’s in price alone.

Unless you’re baking cupcakes, the best use for Baileys is in various shots you might remember from olden days: the B-52, the Mudslide, Baileys Comet, and many others. None are especially good, but might appeal to somebody with a sweet tooth. Perhaps they could serve as introductory cocktails for the infrequent drinker in your life, if there is one.

Better yet, leave the Irish Cream to the pastry chefs, and spend that $30 on a good bottle of Irish whiskey instead.