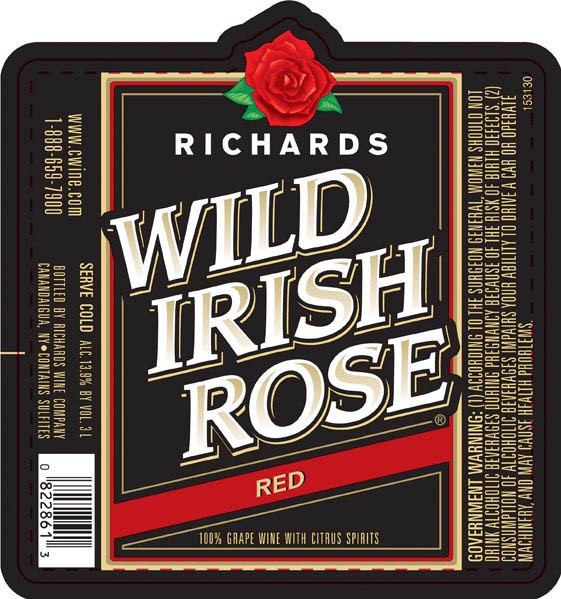 Richards Wild Irish Rose has been helping people survive cold nights on sidewalks and park benches since 1954. Delicious taste doesn’t explain its staying power. Maybe there is no explanation for the success of a street wine named after a 3-year-old boy.

The murky origins of Richards go back to the days of Prohibition. One Mordechai (Mack) Sands got his start in the booze business as a bootlegger, smuggling illegal liquor from Canada into his native New York in the 1930s. Following Repeal he became a partner in an operation called Geffen Industries, which sold suspiciously watered-down wine until the feds forced him to close up shop.

Mack stayed busy with a winery he bought in Virginia, which he renamed Richard’s Wine Cellars after his grandson, three-year-old Richard. Mack put his son Marvin in charge, even though Marvin had little experience in the wine business.

Marvin concocted a “dessert” wine originally made from a mad-scientist’s blend of labrusca, concord, elvira, and catawba grapes, but spiked with 190-proof brandy. The final product had a pinkish coloration. Although it was in no sense a French-style rosé wine, Marvin wanted to suggest rosé to potential dessert wine customers looking for a discount juice. But, according to the book Wines of Eastern North America, by Hudson Cattell, he feared the French pronunciation would be confusing or off-putting to his primary customers, winos.

The problem was solved, Cattell writes, when the sales manager at Richard’s happened to mention a Brodway show he saw that included a performance of the old ballad “My Wild Irish Rose.” The name struck some of kind of chord with Marvin, and so was born Richards Wild Irish Rose.

Richards turned out to be a good seller, if not an instant hit. The Sandses plowed their profits into purchases of destitute wineries and bottom-shelf labels, a cycle they would repeat all the way to the top of the wine world.

“Stack ’em high, let ’em fly” was Marvin’s business philosophy, as reported in Forbes magazine. Taking over for his father in the 1970s, Marvin bought out venerable labels Old Duke and Manischewitz, adding two more cheap wines to the stack. One of the oddities of the Sandses success as wine moguls is that Wild Irish Rose is one of the very few wines they actually made themselves.

Another, if it can be called a wine, was the wine cooler Sun Country. The bloom had started to come off the Rose in the 1980s, and Marvin even considered selling the company. Instead he was persuaded by his son Richard, now a grown man and a company executive, to take a flyer on the wine cooler fad.

They packaged their new product in 2-liter botles and sprung for some big-name talent to headline a Sun Country advertising blitz. The mascot for Sun Country was a polar bear, and entertainers as diverse as Grace Jones, The Four Tops, and Vincent Price were somehow persuaded to endorse the brand while wearing polar bear costumes. Ringo Starr also proclaimed Sun Country a “colossal classic” but avoided being stuck into a bear suit.

It all worked out. Revenue doubled to $173 million in only two years, Forbes reports. There was even enough money to spare for a Wild Irish Rose TV spot. Appearing in 1985, the ad featured jazz legend Eddie Barefield blowing a sax while a voice sang, “Pick the winner, pick the Rose! Pick the wine everybody knows!” Barefield was not asked to dress up in any way or even to speak, and so avoided embarrassment.

Wild-I got another musical boost in 1996, with a cred-boosting name-check by rappers Bone Thugs-n-Harmony. Get the fifth of Rose before the liquor store close, rapped Krayzie Bone in the track “East 1999.”

Country music was not as kind to Wild-I, however. In 1998, country legend George Jones, a recovering alcoholic, devoted an entire song to the horrors of Wild-I, titled simply “Wild Irish Rose”:

He lies there holding his Wild Irish Rose

This crazy old fool in the smelly old clothes

He could have had something much better, God knows

Than a half empty bottle of Wild Irish Rose

Richard became CEO of the company in 1993 and continued his father’s acquisitve ways. In 1994 he bought out the venerable California wineries Almaden and Inglenook. In 2000, the name of the company was changed to Constellation Brands, reflecting the Sandses massive and growing portfolio. In 2004, Constellation shocked the wine world by acquiring the legendary Robert Mondavi label, including a 50% share in the immensely prestigious Opus One Winery. At the time of the Mondavi acquisition Constellation was moving an impressive 30 million bottles of Wild-I a year.

In an interview with The New York Times, Richard Sands once described his namesake wine as a “pleasant, sweet wine whose market is mostly rural and mostly blue-collar.” Uh, okay. At least Richard is defending his rotgut and not running from it. Sixty-plus years of providing comfort to the indigent and afflicted is nothing to be ashamed of.